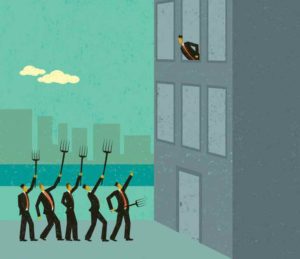 US brokerage and bank operations and compliance managers will soon have to face an onerous back-office and legal challenge — figuring out how to make short sellers pay back $2.74 plus interest for each share of Dole Foods shorted more than three years ago. That money would be used to compensate beneficial investors who are considered the legitimate beneficiaries of a class action suit against Dole Foods.

Triggering this administrative nightmare is a new decision from Delaware Chancery Court Vice Chancellor J. Travis Laster. He has ruled that US national securities depository Depository Trust Company (DTC) and its participants will have to work out among themselves how beneficial shareholders of Dole Food receive their fair piece of the $115.7 million pie in the class action settled in December 2015. The lawsuit accused Dole’s officers of fraudulently pushing down the company’s stock price before selling it into private ownership for US$1.6 billion in 2013. The privatization was structured as a merger agreement.

Delaware is a popular state for companies to incorporate and the Chancery Court is the place to go to resolve disputes between Delaware corporations and their shareholders. The Dole settlement awarded an additional $2.74 a share plus interest to investors who could prove they were beneficial owners or recordholders during the eligible claims period. The eligibility period was June 11, 2013 to November 1, 2013, the day Dole’s privatization took effect and when DTC put a “chill” on Dole Foods stock. That meant that a participant could not deposit or withdraw its shares. Once the “chill” happened, positions in Dole’s common stock were locked in and could not change.

Vice Chancellor Laster didn’t offer any explicit directions for how his decision would work out in operational terms. However, Stuart Grant, a partner with the law firm of Grant & Eisenhofer in Wilmington, Delaware who represented the class-action plaintiffs, says it comes down to the short-sellers compensating other investors.

Compensating rightful investors is no longer Dole’s legal problem. Dole has already handed over the $115.7 million to the claims administrator. Nor is it the problem of the Milwaukee-headquartered settlement administrator A.B. Data which received “facially eligible” claims for about 49.2 million shares. Members of the eligible affected class held only 36.8 million, according to Judge Laster.

According other attorneys as well as Grant who commented to FinOps Report regarding the case, any additional money needed to pay the rightful investors would have to be put up by the short-sellers.

Whether banks and broker-dealers will be able to obtain this money is the topic of plenty of debate among Wall Street operations executives. It all depends on how the contractual agreements between the banks and broker-dealers and  their short-seller clients are interpreted, say legal experts. It could take a quite a bit of time to review past records to locate and then notify the short-sellers. Whatever the agreements said back in 2013, the short-seller — often a hedge fund — could have since gone out of business or closed its account with its bank or broker-dealer. Even if located, the short seller could simply refuse to pay up. What then?

Bottom line: in trying to solve one legal issue, Vice Chancellor Laster may have opened a Pandora’s box of others. Any liability will be shifted from Dole to the bank and broker-dealer participants of DTC. Judges in other state courtrooms could soon be faced with untangling new and even more convoluted lawsuits.

His rationale: apparently, he couldn’t see any other way to solve the dilemma of who is entitled to the payout. “The journey down the rabbit hole would require mapping the whole warren,” argued Vice Chancellor Laster. Here is why: beneficial investors hold shares in the name of their financial intermediary. The financial intermediary, in turn, holds the shares in book-entry form at DTC. The US depository, in turn, holds shares on the books of a company in the name of Cede & Co.

Not so with Dole Foods. There was so much short selling in the days leading up to Dole’s privatization — 2.9 million shares shorted as of October 13, 2013 — that a large discrepancy emerged between the number of “facially eligible” shares whose investors asked for compensation and the number of shares registered on the books of DTC. Because the US has a three-day settlement cycle, the depository’s ledger did not reflect all of the trades in Dole common stock on November 1, the day of the merger, or the two days preceding it.

“The shorting resulted in additional beneficial owners who received the merger consideration who fell within the technical language of the class definition and who could claim the settlement consideration,” explained Vice Chancellor Laster. “Meanwhile, the lenders of the shares, not knowing that their shares were lent, also could claim the settlement consideration.” It is common practice for banks and broker-dealers to lend shares without the beneficial owners’ knowledge.

What about just pretending the claims class is comprised of holders of 49,164, 415 shares and just compensate everyone pro-rata? Sounds a lot easier, administratively speaking. That approach would be “unjust,” said Vice Chancellor Laster. “It would result in 25 percent of the consideration going to holders who should not receive it. As a consequence, the true holders of shares would receive only 75 percent of the settlement consideration.”

“Without obtaining detailed records about the millions of trades that took place during the three days leading up to the closing [November 1, 2013] it is impossible to determine who owned the shares as of closing. And obtaining those records is not realistically achievable,” said Vice Chancellor Laster.

Why not? A.B. Data would need records from over 800 DTC participant brokers and custodian banks and all of the individual clients. It can’t force them to hand them over and even if every single record were produced, a separate forensic audit “of herculean proportions” would have to be undertaken, said Vice Chancellor Laster.

What could have prevented the Dole scenario from taking place? In one footnote to his ruling, Vice Chancellor  Laster suggested that the problem with compensating investors is an “unintended consequence” of the top-down federal solution to the paperwork crisis that threatened Wall Street in the 1970s. That paperwork crisis — thousands of stock certificates having to move between buyers and sellers — led to the creation of DTC and the book-entry system of securities ownership as we know it today.

Vice Chancellor Laster’s suggested solution to the overall problem should make blockchain afficionados happy. In another footnote to his ruling, he said that distributed ledger technology offers a potential solution by maintaining multiple current copies of a single and comprehensive stock ownership ledger. What does that mean in practical terms? Blockchain experts say that short-sellers would likely be identifiable in a jiffy. However, that still doesn’t guarantee that a bank or broker-dealer could force them to give up $2.74 plus interest for each share they borrowed over three years ago.

In the meantime, Vice Chancellor Laster’s ruling should be a warning bell to all short-sellers: you could be asked to give over your trading profit to other investors years later. For operations and compliance managers, it’s also a warning bell. You’re going to be the ones cleaning up the administrative mess.