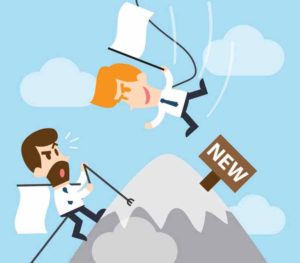 Editor’s Note (6/2/2017): A spokesman for DTCC has informed FinOps Report that effective June 1, 2017, the GMEI Utility has reduced its fees to US$100 to register an LEI and US$80 to renew an LEI. For those who have questions on how the GMEI Utility can cut its fees so dramatically while meeting the GLEIF’s cost-recovery model, here is what the DTCC had to say: “MiFID II significantly expands the use of LEIs in regulatory reporting which will increase LEI registration volume. As a global provider, and in anticipation of increased volume, the GMEI Utility is able to reduce fees while observing the cost recovery model set forth by the GLEIF.”

Price versus size and reach

That appears to be the theme of the David-versus-Goliath battle brewing between data giant Bloomberg and US market infrastructure Depository Trust & Clearing Corp. now that Bloomberg has won accreditation to issue legal entity identifiers (LEIs).

“There is no difference between LEIs issued by different local operating units. One LEI is as good as another,” says Steve Meizanis, head of entity content management for Bloomberg in New York. “Therefore, cost savings, ease of application and service levels will become distinguishing factors.” Of course, Bloomberg is also hoping to leverage its captive user base for terminal and data services to win market share from DTCC’s Global Market Entity Identifier (GMEI) Utility.

The groundwork for the new rivalry between DTCC, parent of the US securities depository and clearinghouses, and Bloomberg was set earlier this month when Bloomberg announced it had won approval from the Global Legal Entity Identifier Foundation (GLEIF) to start issuing LEIs. Based on what little DTCC was willing to divulge about its strategy, it apparently doesn’t think it has anything to worry about. After all, as an incumbent it has size and global reach on its side. “DTCC’s GMEI Utility was the first LEI issuer to be endorsed by the LEI Regulatory Oversight Committee (ROC) and continues to be the largest by share of the total number of LEIs issued worldwide” says a statement issued by DTCC in response to questions posed by FinOps Report. The GMEI Utility was subsequently recertified by the ROC’s successor GLEIF.

DTCC’s GMEI Utility has issued more than 247,000 LEIs since its creation in 2012. DTCC collects and verifies the documentation while global messaging network SWIFT, its LOU partner, actually generates the LEIs. Of the total number of LEIs issued, about half are for non-US firms, says DTCC’s spokesman.

The GLEIF was established by the Financial Stability Board in June 2014 to support the issuance of LEIs by Local Operating Units (LOUs), approved organizations in local markets. As a non-profit group headquartered in Basel, Switzerland, the GLEIF is overseen by the ROC from which it absorbed responsibility for the certification of LOUs. Bloomberg’s approval as an LOU means it has equal status to others which include exchanges, depositories and numbering agencies. Although Bloomberg’s ambitions date back to 2012 it could not achieve LOU status until the GLEIF changed the rules of the game and no longer required that wannabe LOUs receive the backing of a local regulatory agency. The DTCC’s GMEI Utility was supported by the US Commodity Futures Trading Commission.

The LEI is a 20-character alphanumeric ID based on the global ISO 17422 standard developed under the auspices of the International Organization for Standardization. Similar to the way individuals have a passport or national insurance card in the European Union, firms are identified by LEIs. The LEI became the European Union’s standard identifier under the European Markets Infrastructure Regulation (EMIR) and was hardwired into other EU measures including MiFID II and the Market Abuse Regulation. The pan-European securities watchdog European Securities and Markets Authority requires counterparties to have an LEI before they can start trading with each other when the second incarnation of the Markets in Financial Instruments Directive (MiFID) becomes effective in January 2018. Firms must renew their LEIs annually for transaction reporting purposes.

With little time before MiFID II goes into effect, Bloomberg and DTCC are gearing up for the tsunami of applications for LEIs. “We will be doing an extensive outreach program contacting financial firms to ensure they have an LEI,” says Meizanis. That means calling large banks, trustees and fund administrators. Likewise, says Eugene Ing, DTCC’s director of data services in a statement to FinOps. “We expect the pace of new registrations and renewals to increase sharply and in response we have streamlined the process for clients at www.gmeutility.org.”

Whether streamlining means quicker turnaround times for receiving LEIs is unclear. “We offer the fastest turnaround times and will continue to strive to support clients who need more immediate LEI assignment,” says a spokesperson for DTCC who would not specify what quicker meant. Last year DTCC told FinOps that its GMEI Utility could assign an LEI within 24 to 48 hours. Meizanis now says that Bloomberg can do so on a same-day basis, but he acknowleges that response time could depend on the volume of requests for LEIs made.

In addition to preparing for an anticipated increase in LEI requests, DTCC and Bloomberg both say that they will be collecting and validating information on direct and ultimate parents of registered entities. That Level 2 data validation capability must be in place by mid-2017. When asked which unit would do the validation, Bloomberg responded that it would be its Global Data unit. DTCC would not say which business line handles the data validation work. “The GMEI Utility has and will continue to perform all of the validation based on the processes that have been used for over twelve years,” says DTCC’s spokesman.

Bloomberg doesn’t deny that DTCC’s GMEI Utility may have an upper hand for now. It may not be able to persuade DTCC’s existing LOU clients to move over to Bloomberg. However, Bloomberg’s low fees could be enticing. . Bloomberg will be charging financial firms US$75 to receive an LEI with the price dropping to US$70 for anyone who asks for ten or more ISINs. There will be no fee to transfer an LEI from another LOU to Bloomberg. However, if the LEI has lapsed, Bloomberg will charge a US$50 renewal fee which will drop to US$45 if 10 or more LEIs are renewed. All of Bloomberg’s fees include fees that must be paid to the GLEIF, which maintains a global database of LEIs. The GLEIF does not dictate specific fees for LOUs to impose, but requires them to apply a cost-recovery methodology for their price-setting.

Can DTCC trump Bloomberg’s fees? On its website, DTCC’s GMEI Utility indicates that it charges US$200 to obtain an LEI and an additional US$19 that must be paid to the GLEIF. Renewals cost US$100 with an additional fee that must also be paid to the GLEIF. There is also a suggestion of bulk discounts. However, when pressed to verify those fees, DTCC’s spokesman offered the following vaguely-worded response: “We always seek to offer the best service for the best value which boils down to high quality data and improved operational efficiencies at competitive pricing.

“In addition,” he said, “we are able to offer bulk discounts and additional services to clients while accepting payment via credit card and electronic wires,” Payment to receive an LEI from the GMEI Utility can be made in either US dollars or Euros. Meizanis says that Bloomberg’s LOU can accept payments in US dollars through credit or debit cards. However, it will be expanding to other means.

How about ease of application? Bloomberg says it is offering three venues to obtain an LEI. Its terminal service and entity exchange platform can be used by existing clients while lei.bloomberg.com can be used by new applicants. Bloomberg won’t divulge the number of customers using its existing terminal and data services, but it must certainly be multi thousands of broker-dealer, traditional fund managers and hedge fund managers.

Meizanis would not predict whether Bloomberg’s LOU would have any advantage over DTCC with either buy or sell-side customers. “We will be servicing all categories of LEI applicants equally and have received equal interest from buy and sell-side firms,” he says. However, it stands to reason that Bloomberg would fare better with fund management firms than broker-dealers and banks who are DTCC’s participants. As active traders, the world’s largest broker-dealers and banks likely already have their LEIs. However, smaller-sized shops and some fund managers might be behind. Bloomberg’s recently launched Entity Exchange, which helps fund managers onboard their KYC information to broker-dealers, might also give it an edge.

DTCC would not break out the number of fund managers, banks or broker-dealers issued LEIs through its GMEI Utility. However it claims far more avenues of access for LEIs than Bloomberg. In addition to the GMEI Utility website, DTCC has partnered with five registration agents. They are CUSIP Global Services, MERSCORP Holdings, the Canadian Depository for Securities, Switzerland’s SIX Securities Services and NordLEI. “The GMEI Utility’s partners represent more than just venues. They also provide local language, currency and juridictional guidance,” says DTCC’s spokesman. Such a global reach in over 200 jurisdictions might be favored by global firms who want a single access point for obtaining and renewing their LEIs .

Bloomberg counters that its geographic scope is nothing to sniff at. “Our LOU covers over 160 jurisdictions and we are currently working with the GLEIF to add more,” says Meizanis. “Bloomberg already has 192 locations around the world and some of those will assist in issuing LEIs.”

Ultimately, financial firms might not really care about who issues their LEIs as long as they have one when they need it. For those who want to save a little money and are already using Bloomberg’s services, Bloomberg certainly offers a viable option. At the very least, it has given financial firms some thinking to do about which option is best.