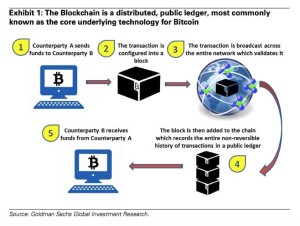 The decision of the Depository Trust & Clearing Corporation (DTCC) to try out distributed ledger technology for processing repurchase agreements has drawn plenty of attention from Wall Street and blockchain enthusiasts. It also has participants in the repo business at the edge of their seats, watching to see how their bottom lines could be affected.

The DTCC’s announcement on repo trades coincided with a DTCC-hosted private blockchain event in New York which showcased enthusiasm for blockchain technology. The new technology is being discussed by numerous banks and broker-dealers for just about every operational process ranging from trade confirmation to settlement. As FinOps Report went to press, DTCC released another announcement that it and other financial firms, as well as swaps processor Markit, have successfully tested blockchain with distributed ledger technology firm Axoni to manage post-trade events for standard North American credit default swap contracts.

Given DTCC’s stature as the US market infrastructure responsible for clearing and settling US securities transactions and its critical role in the US$2.6 trillion repo market, these announcements of blockchain projects send a loud-and-clear message to the financial industry that the blockchain revolution in processing is real and happening now. If the DTCC repo project is successful, topping the list of potential benefits are reduced capital requirements and operational costs.

DTCC said it is working with Digital Asset Holdings, a blockchain technology company which grabbed a US$52 million round of funding from boosters such as DTCC, Citi, Goldman Sachs, Accenture and Broadridge. The repo project will evaluate blockchain as means to establish its subsidiary Fixed Income Clearing Corp. (FICC) as the settlement counterparty for repo trades in real-time, “allowing additional netting and offsets.” The first phase of DTCC’s project with Digital Asset will be development of a proof of concept. Future phases will include collaboration and testing with market participants. DTCC could ultimately expand the use of blockchain technology to other financial processes.

Launched in 2014 by Sunil Hirani, who in 2008 sold his Creditex Group to Intercontinental Exchange for US$513 million, and Donald Wilson, founder of Chicago-based DRW Trading Group, Digital Asset is part of a cottage industry of companies building technology on blockchain. In 2015, the New-York headquartered firm was busy buying up three other blockchain technology firms and one those deals — the purchase of Hyperledger– gave Digital Asset membership in the Linux Foundation’s open source Hyperledger Project to drive the adoption and standardization of distributed ledger technology.

Repo trades were selected by DTCC as the first candidate for a test trial in distributed ledger technology because of its real-time information sharing capabilities. Repos play a critical role in providing short-term borrowing for dealers. Cash-rich companies lend cash to banks and brokerages in exchange for securities — often bonds — which are bought back at a later date at an agreed=upon price. The Securities Industry and Financial Markets Authority (SIFMA) estimates that US Treasury securities account for close to 35 percent of repo agreements while agency mortgage-baked securities account for about 45 percent and agency securities the rest.

Currently traders must process two legs of each repo trade separately. In the first or start leg, borrower to deliver securities in exchange for cash. In the second, FICC unwinds or closes the trade. While FICC currently compares and nets repo transactions it does not settle the start leg of the trade, which is where blockchain technology would fit into the equation. With the blockchain project, DTCC is aiming to make FICC the immediate middleman guaranteeing the start leg of the trade.

Blockchain, the digital ledger technology that underpins the virtual Bitcoin currency, is a method of recording data — transactions, agreements or contracts that need to be independently recorded and verified as having occurred. The digital records are confirmed as accurate by the participants, then frozen into a “block,” which is then bound cryptographically and chronologically into a chain using complex algorithms. Once any block is added to the ledger, it can’t be altered or tampered with.

One logical effect of DTCC’s use of blockchain technology for repos would be to reduce regulatory capital requirements for member firms, say broker-dealers and banks. “If FICC is able to become the central counterparty and settle trades more quickly, it would increase the number of trades netted and offset, while reducing counterparty risk,” notes a broker-dealer operations manager in New York. “The lower the counterparty risk, the less regulatory capital we have to set aside.”

It is too early to tell just how much regulatory capital could be eliminated by netting of repo trades enabled by blockchain. However, in a report on blockchain technology, Autonomous Research, a New York and London-based independent research firm, estimates that $6 billion of the US$120 billion in annual regulatory capital related to counterparty risk posted by 13 capital market players in the US and Europe could be freed up by 2021 if blockchain technology were used in a range of post-trade functions. Those include processing repo trades.

“Regulatory capital related to counterparty risk is typically broken down into the risk involved with over-the-counter derivative transactions, repo transactions, and other trades processed through a clearinghouse,” explains Geoff Elliott, a partner at Autonomous Research.”As a rule of thumb the faster a trade is settled, the lower the counterparty risk and the lower the amount of regulatory capital required.”

Prakash Neelakantan, vice president of financial market solutions at Genpact Headstrong Capital Markets in New York, predicts an even more immediate effect of DTCC’s initiative could be a reduction in the amount of capital contribution to the FICC’s default fund — a stance which DTCC confirms. “The amount of capital required by participants in the event of a default is based on their position,” says DTCC in its response to emailed questions from FinOps Report.”The new technology would allow for netting the start leg of the repo which would reduce their overall positions and as a result their capital requirements.”

The benefits of capital reductions aside, operational costs could also be affected, predicts Elliott. “With an indisputable and immediately accessible record of transactions, financial firms could reduce the need for reconciliation — or ensuring that their records match FICC’s,” he says. Neelakantan agrees. “The unchangeable auditable trail of records, when supplemented with real-time matching based on smart contracts can simplify the matching and confirmation process, thereby reducing unnecessary matching and reconciliation,” he says.

If DTCC fares well in its first venture into blockchain technology, it will accomplish more than reducing risk and saving money in the repo market. The result will also be a host of leading institutions getting their first whiff of how blockchain works in the traditional finance world. It could be the big case study that blockchain enthusiasts have been waiting for.