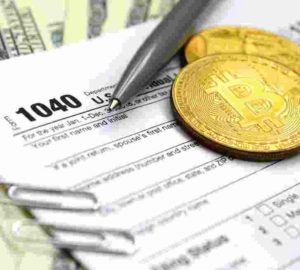 If you are a cryptocurrency investor, you can forget about enjoying your summer vacation, thanks to the US Internal Revenue Service.

By the end of August, you could be one of the 10,000 investors to have received a letter from the US tax agency that you owe taxes on your cryptocurrency investments. You will need to spend all your spare time finding all your transaction data, calling your accountant, or finding yourself good tax lawyer.

The IRS means business. It says that if an investor has sold, exchanged or disposed of virtual currency or used it to pay for goods and services, the transaction is reportable. And potentially taxable.

The new letter campaign is one of several the IRS announced last year to increase compliance with tax requirements for cryptocurrencies. In 2016, two years after the IRS called cryptocurrency a taxable property, only 802 individual tax returns out of the 132 million filed electronically reported income related to cryptocurrencies.

There are three versions of the same letter depending on how much dirt the IRS thinks it has on an investor. One of the letters has a gentle tone, one threatens legal action and the other falls somewhere in between. “The IRS has not come up with any concrete guidance since 2014,” says Cameron Routh, chief commercial officer for tax and analytics at Scivantage, a tax information reporting firm in Jersey City, New Jersey. “However, the IRS has repeatedly warned investors that they will be subject to taxation even though it is unclear how they should calculate their capital gains tax or loss.”

As a result, investors are forced to wear poorly constructed shoes that might not fit them just to avoid being burned when they walk over hot charcoal — or the IRS’ tax rules. Here is what the three letters are all about in a nutshell:

Letter 6173: The IRS has definitive information that an investor has not reported crytocurrency transactions either on a filed tax return or when a return wasn’t filed for one or more years btween 2013 and 2017. The investor must respond by submitting either an amended tax return or filing a tax return or else face a potential audit or criminal investigation.

Letter 6174: The IRS doesn’t have enough information to prove that an investor didn’t properly report cryptocurrency transactions. If the inestor made a mistake in previous tax returns it’s now time to come clean. The investor is asked to amend them and pay all additional tax and penalties.

Letter 6174-A. The IRS is taking a middle of the road tone. It says that the investor may have reported cryptocurency transactions but incorrectly. No further response is required.

Chances are that the IRS does have some information based on a July 2017 requirement that US cryptocurrency exchange Coinbase hand over detailed information on tax evaders. A court order in November of that year reduced the number of users Coinbase was required to disclose from 500,000 to around 14,000 which are the “highest-volume” investors.

Now what? Investors can’t plead complete ignorance. “Those who have paid their taxes in cryptocurrency will need to verify that they paid the correct amount,” says Ciril Cohen, a tax manager with the audit firm of Berkower LLC in Iselin, New Jersey. “Those who have paid some of their taxes — meaning for one or more of the years after 2013– will need to explain why they didn’t properly report all of their cryptocurrency transactions since 2013.

The only way investors can defend themselves against the IRS is with the right data proving that the correct amount of taxes has either been paid or will be paid. “The data needs to include the date and price at which the cryptocurrency was purchased, and the date and price at which it was sold to show whether there is a short-term or long term gain involved,” says Nico Willis, chief executive of NetWorth Services, a cost-basis accounting technology firm in Phoenix. “Exchanges from one cryptocurrency to another also need to be included in the calculation as well as any forks and the methodology used to sell the cryptocurrency.”

Collecting that data won’t be easy. Accountants say that Coinbase and other exchanges might provide transaction data but won’t vouch for whether it is sufficent to respond to the IRS’ request to pay the correct amount of taxes. The exchanges would likely be generating Form 1099K, which is usually used for merchants receiving payments. The correct form would be Form 1099B, with the investor using the information on that document to populate Form 8949.

Because there is no legal requirement to do so, neither Coinbase nor any other US cryptocurrency exchange is compelled to calculate the actual cost basis of any cryptocurrency transaction. Most retail investors in cryptocurrencies trade directly on exchanges rather than going through a broker as would be the case with equity or fixed-income trades.

Determining the cost-basis of a cryptocurrency investment is a mega challenge if the investor traded on multiple exchanges because the value of the cryptocurrency can value in price widely between different exchanges. The American Institute of Certified Public Accountants has recommended that taxpayers use the average rate of the day, the average rate of different exchanges, or a third party exchange rate index as long as they use each method consistently.

In its letters to cryptocurrency investors, the IRS suggests they look at the exact date and time they conducted a transaction and use that price. Such a recommendation makes the process of data discovery for investors that much harder, say tax accountants. It also deviates from previous suggestion to apply an exchange rate in a “reasonable manner” as long as it is consistent.

Coinbase wouldn’t have any record of transactions done at other exchanges or through private wallets, which would also affect any capital gains tax or loss. “The higher the number of cryptocurrency transactions on one or more exchanges, the higher the potential for error,” says Cohen.

All the IRS likely has is an understanding of the gross proceeds of transactions on Coinbase. Unless investors come up with the right documentation they could end up paying a far higher tax than necessary. “It is in an investor’s best interest to find as much data as possible to ensure that it didn’t incur a capital loss instead of a capital gain,” says Salvatore Vescio, director of tech support for cryptocurrency taxation software firm CoinsTax in New York. “Alternatively, the capital gain could be far lower than what the IRS would calculate using gross proceeds.

Another way of trying to figure out how much you owe the IRS is using one of several do-it-yourself tax packages on the market. CoinsTax says that its software as a service, Bitcoin.Tax, can be used to make the right capital gain or loss calculations. NetWorth Services says that it will launch a hybrid cryptotax software package in the fall for retail investors needing help with cryptocurrency and transitional assets. “Regardless of which software platform an investor uses finding the right data is critical to determining the correct tax figure,” says Vescio. “Investors might only have eighty percent of the necessary data which increases their chances for paying a higher tax.”

One of the biggest data gaps will likely be knowing the methodology used when selling and whether it can be legitimately applied in calculating the cost-basis of an account. Using the average cost basis on the first-in, first out (FIFO) approach, which allows the price to be registered at the time of first purchase, is common in stock trading but might not always work for cryptocurrencies, say tax accountants. Case in point: what if the price of the earliest acquired cryptocoin were zero, because it was won through cryptomining. In that instance, using the FIFO approach might generate an artificial capital gain.

The IRS’ letter also doesn’t address what happens if the iinvestor owns cryptocurrency it bought and sold on overseas exchanges. The AICPA has also recommended that the investor apply the rules for foreign bank accounts. That means reporting any accounts to the IRS valued at over US$10,000 under the Foreign Bank and Financial Accounts Report (FBAR). If the account is worth over US$50,000 reporting under the Foreign Account Tax Compliance Act (FATCA) also applies.

Investors who know they haven’t paid any taxes on their cryptocurrency investments are in scalding hot water. The same applies to those who can’t find any transaction data. “Investors in those categories will likely need to find themselves a good lawyer to settle with the IRS,” says Willis. Why? “If the tax agency determines that its inquiry is a criminal investigation, it will have a stronger case to audit all of an investor’s holdings, not just the ones involving cryptocurrencies,” he explains. “The IRS could also be in a position to prove the tax avoidance was intentional, hence leaving the investor open to higher fines and potential criminal charges.” Speaking to one’s accountant might not be the best idea because he or she is not subject to the same rules of attorney-client privilege as an attorney.

The best hope for investors would be for the IRS to require exchanges, brokers and banks to calculate the cost-basis of cryptocurrency transactions. The IRS also needs to clarify the taxation of forks and how sales methodologies, such as FIFO, apply to cryptocurrencies.

When that will happen is anyone’s guess. In May, IRS Commissioner Charles Rettig announced there would be guidance within thirty days but that deadline has passed. In the meantime, investors and tax advisors are left to make the best educated guess. Payin some tax is always better than paying none.