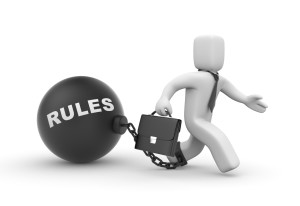 Broker-dealers and banks aren’t the only ones running off with customer monies.

The US Securities and Exchange Commission is cracking the whip on shareholder recordkeepers for doing the same. Misappropriation of issuer and investor funds was one of the two major operational deficiencies the US regulatory agency’s Office of Compliance Inspections and Examinations says it uncovered during its exams of seventy-five transfer agents from October 2014 to September 2017. The other was not properly looking for investors whose dividend checks were uncashed or whose mail was returned as undeliverable. The seventy-five transfer agents also served as paying agents.

Transfer agents aren’t dealmakers, but their plumbing work is important to their issuer clients and their registered investors — those whose accounts are held in their own names on the books of issuers. Transfer agents are responsible for issuing and cancelling stock certificates, dispersing dividends to registered investors, and administering stock purchase and dividend reinvestment plans. Banks and broker-dealers handle recordkeeping and payments for Street-bame investors or those who hold their shares in the name of a financial intermediary.

Although the number of registered investors has declined over time, there are still enough to take up work at over 100 transfer agents falling under the SEC’s scrutiny. Through a series of acquisitions, Chicago-headquarterd Computershare now handles the bulk of registered investor accounts in the equities market followed by dozens of small to mid-sized firms. Mutual funds complexes often do their own shareholder administration or outsource part of it.

The SEC’s discussion of transfer agent shortcomings appeared in a risk alert in February in which it also offered some examples of best practices. The good news is that legal experts representing transfer agents insist there is no cause for alarm. “The SEC didn’t find any evidence of widespread wrongdoing,” says Mark Harmon, a partner with the law firm of Hodgson Russ in New York. “As is the case with any industry sector, there will always be a handful of bad players and transfer agents for the most part are trying to do their jobs correctly.” Likewise, Anthony Nuland, senior counsel with the law firm of Seward & Kissel in Washington DC took the SEC’s findings with a grain of salt. “There is nothing all that unusual in what the SEC found and it shouldn’t worry transfer agents who are following the SEC’s rules,” he says.

The bad news is that transfer agents can’t take any chances now that the SEC has made its priorities clear. “Transfer agents have been put on alert that the SEC will be spending more time evaluating their handling of customer securities and funds,” says Larry Bergmann, a partner with the law firm of Murphy & McGonigle in Washington DC. “Transfer agents have similar responsibilities to banks and broker-dealers to protect client assets.” Those assets are cash payments made by issuers intended for investors and certificates representing securities purchased and sold by registered investors.

All transfer agents handling securities registered under the Exchange Act of 1934 must be registered with the SEC and follow “safeguarding” requirements under Rule 17Ad-12. That means that they must hold securities and cash separate from their own and in way that avoids fraud and theft. Mutual fund transfer agents, often units of mutual fund complexes, must follow similar rules under the Investment Company Act of 1940.

Those transfer agents which are doing their jobs well, says the SEC are maintaining logs of unused and uncashed checks, conducting audits of blank certificates and cancelled certificates; and dividing responsibilities among different individuals.

The handful of “bad” transfer agents apparently believed they could get away with sloppy work or wrongdoing. Taking money intended for investors to pay their own bills or personal expenses was the tip of the iceberg in how some transfer agents went astray. Others also kept physical certificates in unsecured locations resulting in their reissuance to the wrong shareholders, stored certificates in unsecured vaults. Yet others never bothered to look for shareholders whose checks were uncashed or whose mail was returned as undeliverable.

Until recently, the SEC has spent much of its enforcement efforts on transfer agents caught up with fraud involving microcap companies. Case in point: in February 2019, the SEC sued broker-dealer Spartan Securities and Island Capital Management, which does business under the name Island Stock Transfer, for helping to manufacture deceptive floats of public companies from December 20009 to August 2014. Both firms have publicly denied any wrongdoing.

However, the SEC has now expanded its reach into the basic operational responsibilities of transfer agents as is shown in its case against Illinois Stock Transfer. In 2016 its owner Robert Pearson pled guilty to wire fraud for using over US$1 million in issuer funds to meet the firm’s payroll and tax costs instead of making payments to investors.

Misusing issuer funds outright isn’t the only way transfer agents can make off with client money. They can also tip their hands into uncashed dividend checks. Transfer agents might presume that investors won’t come looking for the money if they have died or not bothered to notify them about a change in address.

The SEC does require that a transfer agent makes some effort before it declares an account as abandoned and transfers it to a state coffer. Under the SEC’s Rule 17Ad-17(a)1 transfer agents must search through two public databases and send out the correspondence again.

Doing so, transfer agents would likely be able to track down at least some investors and reduce the number of accounts marked as “unclaimed” or lost. Transfer agents can do the search on their own or rely on a third-party.

In its February risk alert, the SEC says that in some instances, transfer agents weren’t doing their jobs tracking down investors correctly and didn’t even record when the check was uncashed. “Clearly, transfer agents should be keeping track of the funds they disbursing, which checks are uncashed and which mailings of checks are returned as undeliverable,” says Kara Kennedy, president of Tampa Bay, Florida-based transfer agent ClearTrust who also runs a consultancy advising transfer agents on best practices. Transfer agents who are using other service providers to do their searches need to document their work and findings.

Transfer agents who want to meet the SEC’s requirements will find that compliance doesn’t come cheap. As the number of registered investors declines, so do profit margins and losing even a single large client can be the kiss of death. Illiinois Stock Transfer’s owner insisted he didn’t take issuer money for himself. He had lost some clients and couldn’t meet his overhead costs. Of course, the SEC didn’t find his rationale compelling.

So what’s a transfer agent to do to stay clean without breaking the bank? “Transfer agents can and should perform regular internal reviews of their policies and procedures and proactively test for operational deficiencies,” says Kennedy. Why? Doing so they can determine whether they are in par with the SEC’s requirements and industry best practices. Next up comes a system of checks and balances and continued employee training.

Ideally, a chief compliance officer should be in charge of the internal review process, says Bergmann. However, many transfer agents don’t have deep enough pockets to pay for a CCO in which case a chief executive or chief financial officer can take charge.

The fewer the number of employees the greater the chance for wrongdoing as those minding the shop go unsupervised. The SEC has put in place its own checks and balances. Its Rule 17 Ad-13 does require a registered transfer agent to obtain an independent accountant’s report on its system of internal accounting control and file the report with the SEC, notes Bergmann. Transfer agent units of larger banks would have their bank auditor to the work. Regardless of who does the work, any reports would identify any material inadequacies in the internal accounting controls.

Although the SEC’s findings and recommendations didn’t appear to be focused on mutual fund transfer agents, they also need to pay close attention, caution compliance experts. “Compliance directors at mutual fund transfer agents should review their systems to determine whether they are correctly segregating client assets and securities,” recommends Nicholas Prokos, a partner with the investment company division of ACA Compliance Group, a New York City based regulatory compliance consultancy. “They may also wish to consider the procedures for issuing and destroying physical certificates and for clearing checks written on money market funds.”

Some mutual fund complexes still have an outstanding issuance of physical certificates to evidence ownership of shares. Sloppy recordkeeping work could result in redeeming “fake” certificates or certificates not being properly cancelled, says Prokos. Certificates that are not destroyed correctly could end up in the wrong hands and may be used as collateral. Likewise, checks written on a shareholder’s mutual fund account need to be reviewed, cleared and destroyed correctly to safeguard against potential fraud against a shareholder’s account or potential losses against the fund or transfer agent.

Although the SEC has not been successful in upgrading transfer agent rules since they were first implemented back in 1977, it appears ready to resurrect the matter after a late 2015 concept release promoting reform fizzled. Brett Redfearn, director of the SEC’s Trading and Markets Division recently said that his unit will recommend a rule specifying the obligations of transfer agents to track and remove restrictive legends from securities.

Transfer agents have long complained that without any guidance from the SEC they face conflicting state rules and could be fined for honest mistakes in removing restrictions on unregistered shares which are not supposed to be sold to the public. When that happens con artists can artificially drive the price of the shares up and dump their shares on unwary investors. The end result is the price of the shares tanking.